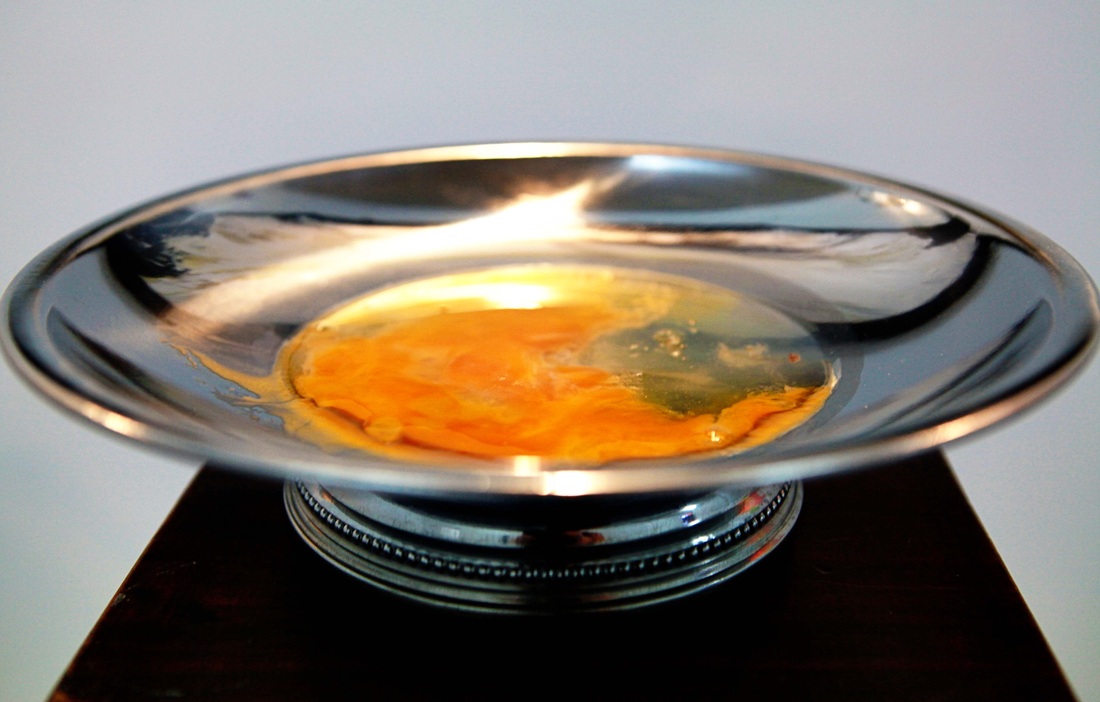 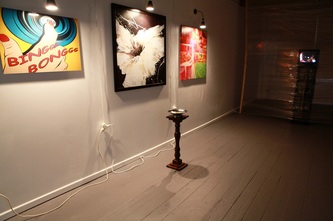 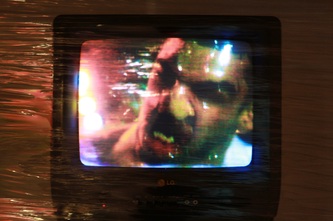 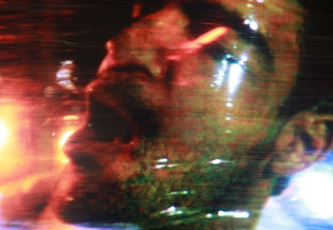 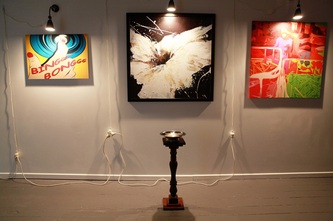 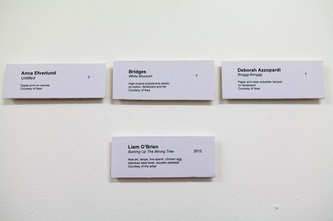 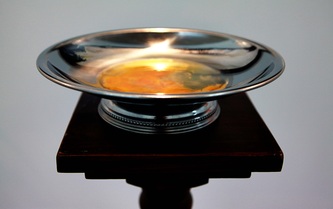 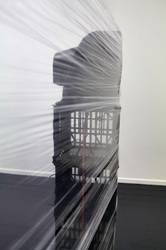 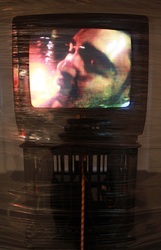 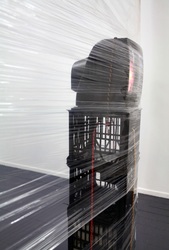 A Response to 'Shooting Blanks' by Carmen Ansaldo

Liam O’Brien’s practice utilises the artist’s body both as subject and medium to reveal the personal and professional dilemma of the artist under late capitalism. Shooting Blanks addresses the commercial pressures inflicted on the artist and art establishment from a fresh perspective which builds on the concerns of his previous performances. In these past works, O’Brien interrogated the limits and agency of his body through video, photography and ‘happenings’ as a sort of psychological problem solving tool that resulted in a plethora of failures. I use the word ‘failures’ because to date, O’Brien’s work has solved none of the problems he set out to debunk. Instead, he has documented fruitless, futile struggles that have only unearthed more complexities, more considerations. Acting these problems out as experiments onto his body, O’Brien’s failures manifest in events of complete self-flagellation reoccurring into infinity (i.e. To laugh in the face of futility (2009), (2010), (2012)). Yet, the sensuous colours, careful framing and professional editing he employs renders these self-persecuting failures as undeniably beautiful works of art. It’s as if O’Brien’s conceptual anguish has developed parallel to his technical ability. Each new work is more aesthetic, yet more hopeless than the last. Consequently, his signature combination of resolved process and futile intent has always been unnerving, confusing and dark to witness and I cannot say I know of another Brisbane artist who uses their art practice as an opportunity to be so utterly hard on themselves.

This back catalogue of beautiful, harmful failures has eventuated in the exhibition you see here. Shooting Blanks presents lucidly the duality of O’Brien’s artistic predicament – the quandaries commercialism poses for both the status of artist and artwork. It has been argued through Marx’s theory of alienation that the artist is the only individual left in society who is not isolated from the products of her labour. This argument has been thoroughly challenged first by the ready-mades of Duchamp, then again by the simulacra reproductions of Warhol. But far more recently, the contemporary works of post-modernist artists Jeff Koons, Damien Hirst and Takashi Murakami mark a transgression from this critique. Far from utilising the language of mass production to dissect the motivations of the capitalist system, these artists utilised the mass production of their works with an ambivalence that demonstrates complete complicity toward the status of the mass produced, fetishized object. This shift from critique to compliance now prevents the art object from analytically engaging with its modes of production. By mounting three cheap, mass produced paintings straight from Ikea onto the gallery wall, O’Brien reveals the outcome of this ambivalence when it filters down to the working class. In Barking up the wrong tree, O’Brien has installed an ornate plinth in front of Ikea paintings which supports a silver bowl containing a chicken’s yolk mixed with the artist’s semen. In this installation he lays bare the incompatibility of capitalist and artistic values. Although this gaudy commercialism is clearly deplored by the artist, the inclusion of his semen as part of the installation acknowledges his unavoidable participation within the same system of aesthetic consumption.  Wanderlust – a video of the artist attempting to break through a transparent glad-wrapped barrier – illustrates the personal pressure to travel abroad in order to establish himself as a legitimate emerging artist. Travel, in this sense, becomes the signifier of O’Brien’s journey to attain a ‘professional’ legitimacy – to start CV padding and ladder-climbing the artistic hierarchy. The pressure on the artist to present as a glad-wrapped, finished ‘product’ ready for mass consumption is obvious. It is a requirement which, try as he might, he cannot fulfil due to his better nature. Nevertheless he relentlessly (and fruitlessly) tries.

On one side of Shooting Blanks we witness the pitfalls of commercial art; on the other we witness the pitfalls of academic art. O’Brien argues that the current objectives of both have been made vulgar through the pressures of capital. As an artist, O’Brien finds himself unavoidably in the push and pull between both worlds, and is forced to navigate between them. He is conscious enough to understand his situation but, just like his past predicaments, he is unable to locate an escape route.

A Response to 'Shooting Blanks' by Kate Mackenzie

Being asked to write critically by an artist about his or her work, with a slant towards negativity, is in itself an odd proposition, even awkward. Prior to the exhibition, during a meeting with Liam about his work, and through email correspondence, Liam expressed dissatisfaction with his current methods of producing, and evaluating his work. After finishing an undergraduate and honours degree at the Queensland College of Art in Photography, Liam criticised his work for being “…overly conceptual, and semiotically driven…”, lacking in what could be described as an emotional pull, or emotional content that he would like it to contain.  Liam described his difficulties in progressing to a method of practice that creates such work as coming from “…trying to forget or deny how you were taught to produce and
evaluate work.”

Subsequently, the writing that follows is an honest account of my experience of, and thoughts about Liam’s current exhibition, Shooting Blanks – an exhibition that Liam considers as being part of the early stages of a major transition in his work, and practice.

My first experience of Liam O’Brien’s Shooting Blanks left me with a positive feeling about the work. I felt a connection with the aggression in the work, which seemed to be directed both at the spectator, and at attitudes towards ‘art’. I far from enjoyed standing in a room that smelt like stale semen and rotten eggs, while looking at paintings courtesy of Ikea. But in a way I came to feel a sense of appreciation for being held by the work because of my obligations as a spectator; I had to remain with the work in order to see it properly, and to look for responses to the simple, preliminary questions of why the combination of ‘live sperm’, rotten egg, Ikea, cling wrap, were chosen, and so on. In a kind of confused and depraved way I enjoyed being held accountable, unable to look at the work and escape the effects of it.

I often feel as though at the audience end of the spectrum between artist and audience, there is not enough accountability, and not enough at stake.  As a whole, I experienced Shooting Blanks as an exhibition that spoke out against an accepted audience attitude – towards art, and exhibitions – that doesn’t consider why one would want to look at art, and what one would wish to get out of their experience of the work they are viewing. When an exhibition is viewed with such an attitude, a frustration can be found in the lack of meaning, and purpose that comes about between the audience, and the work.

However, the positive feeling I experienced, which was a shared distaste for ambivalence, and a ‘detached flâneur’ approach to viewing art, dissolved over a period of time into something less positive. Past works of Liam’s, including the performances: To laugh in the face of futility (2012); I’m too drunk to tell you (2012); and Free money (2011), all come from a place that speaks directly and specifically against issues within society as observed by the artist; either the struggle of the individual against the confinements inflicted by the structures of society, social stigmas and pressures surrounding alcohol, or the frustration of being unable to escape a dependence on money. Perhaps this is an unjust, and too brief a description of the works mentioned, but it leads to an explanation of the less positive feeling that I eventually experienced after seeing Shooting Blanks.

Liam’s Shooting Blanks is created with an intention to communicate emotions of contempt about a certain kind of art.  It does so however, using visual ploys and languages that are essentially semiotic in presentation, and at times, overly conceptual. The intention of creating something beyond this is present; Shooting Blanks is a collection of works that communicate contempt for the overly conceptual and semiotic in art, in reach for something more absorbing (perhaps this is what is on the other side of the cling wrap). The problem is, however, that the work is at its core, actually in unanimity with overly conceptual and semiotic work. It doesn’t step outside the system of the conceptual and the semiotic, and therefore, struggles to create something above that which Liam has contempt for.

The aromatic contents of Barking up the wrong tree produced less of a shock, and more of a dislike for being within the proximity of the work. This is perhaps a response that is symptomatic of the situation of art today, at least from my own perspective. Not much is shocking in art, because shocking post urinal, post irony, post an image of Jesus on the cross submerged in urine, and post gold urinal is in a way, quite boring. What’s most shocking now is sincerity.

Shooting Blanks is an exhibition that is as much a product of as it is a reaction to important and present issues felt by both audiences, and artists.