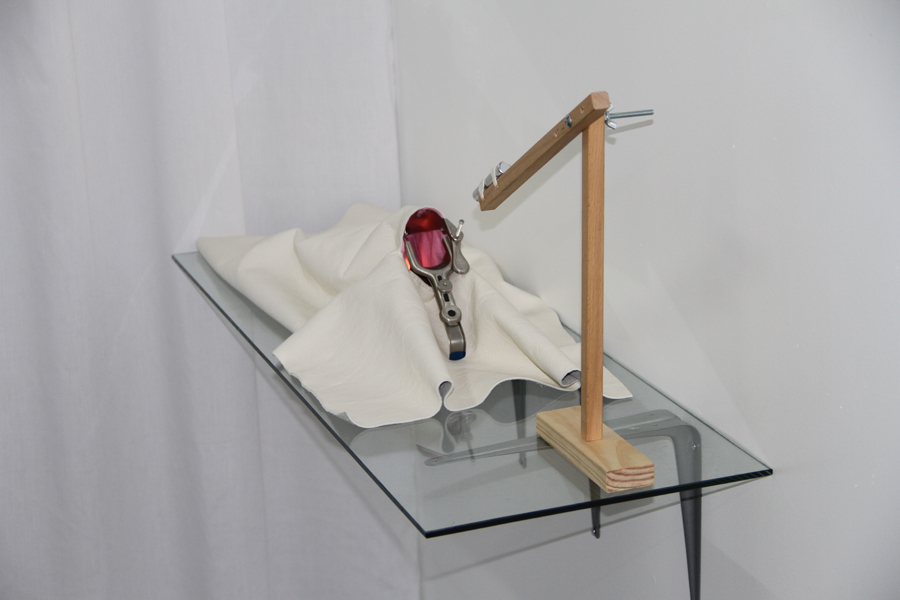 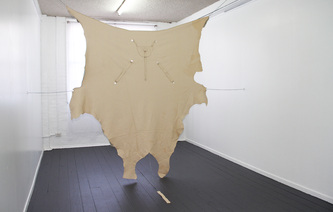 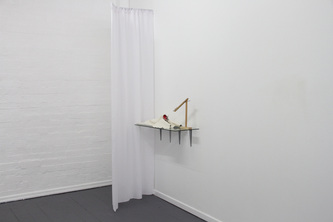 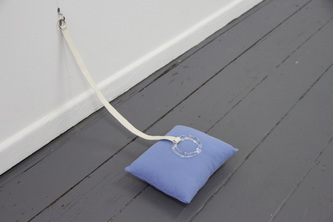 Bataille tells us that the Marquis de Sade’s writing is about the universal experience of sensuality, the root cause of which is indefinable; particularly so when liberated from the constraints of so-called normality. Lust may be aroused not only by the presence of, but also by the modification of an object or impulse.i Sade is depicted as having indulged in perverse excess, carried to extremes, which consumed him to the point that his life was endangered by this very indulgence. His view of sensuality was reeling in a desire for release and for liberty. Pursuant to this reflection, one must ask, what does sensuality look like to a generation born after the emergence of the multiple dialogues around gender politics and the social liberations of the 1960s and ’70s?ii

This generation of artists seems to avoid self-assertion. The focus of their work is not on expressing an absolute formation of ‘self’, but is instead focused on the indeterminate and undifferentiated states which break down the differences between genders and generations. In lacking a clear definition, the notion of sensuality becomes an ambiguous place in which experience may be both painful and pleasurable. It can be simply said that what is revealed here is an attitude that is unreservedly playful. Anastasia Booth’s practice is situated firmly within the parameters of this train of thought.

Booth’s work playfully examines the mechanisms of suggestive imagery in order to produce works that although ambiguous, are strangely evocative. With an ability to counterpoise both implicit and explicit tropes, her work is imbued with an innate ambivalence, which both creates and retracts meaning. This operation of doubling both ensures and undoes the link between perception and affect. Subsequently, Booth’s objects – like other ‘post-erotic’ artists working in a similar vein, such as Nathalie Djurberg – express “a kind of polymorphous eroticism generally divorced from actual sex, or intimacy, or even flesh-and-blood entities. Inclined neither toward protest nor advocacy, nor even simple provocation…”.iii This emphasis on ‘fetishism’, divorced from actual sex is perhaps the distinguishing feature of Booth’s practice. Her method of juxtaposing images from a myriad of disparate sources serves as a means of distancing the artist from any hint of personal narrative, but it also creates a space in which the viewer inevitably creates their own.

So what makes an activity a sexual one? Or more specifically, what makes an image an adjunct to an interpretation of sexuality? It is quite possible that any activity could be interpreted as being of a sexual nature, for an object in itself does not have a sex or a gender. This interpretation lies in the realm of the viewer. An object that signifies sensuality for one individual may not necessarily do so for another. The object itself may have implicit operations that engender a witnessing body to pursue its meaning further, because if an ordinary device is to be sexualised, its original purpose must be substituted for one through which pleasure is attained.

In Ache Deep, Booth appropriates the clinical appearance of medical instruments, and through manufacturing a substitution for their very function, infers that they are devices for stimulating arousal. For this show, she has created an environment that is both sparse and clinical in its design. Within the installation itself there is an assortment of objects that one would normally associate with a hospital examination room. Among these is a speculum, which peers into a sheet of listless white leather. A surgical curtain protrudes from a wall. Juxtaposed against these is a large animal hide, the inclusion of which disturbs the aseptic nature of the other works.

The incongruous nature of this setup beckons the viewer to identify the objects as points of departure for an understanding of the work’s meaning. The narrative that subsequently develops becomes an open-ended proposal, and as such, requires the viewer’s personal interpretation. Booth’s objects are divorced from their original meaning and as a result the viewer is forced to create an appropriate narrative for their function. Any notion of sexuality collapses as a result of the work’s implicit absurdity. The inherent humour in Booth’s work facilitates discussions around uncomfortable subjects. It exposes self-consciousness without pretention.

Booth’s practice is concerned with the material peculiarities associated with divergent sexual practices. She examines how certain objects can be appropriated and does so in order to reconsider how notions of ‘fetish’ might expand dialogues around sexuality. Her work does not seek to decipher the psychology of a subconscious compulsion. Her interests lie with the objects themselves. For her, the object itself is all-important. Booth’s interest in female sexuality is utilised within a playful generative space. Hers is an instrumental strategy designed to produce work that questions the nature of sensuality itself.