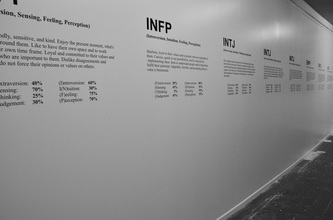 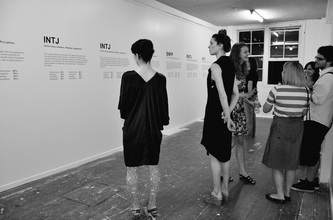 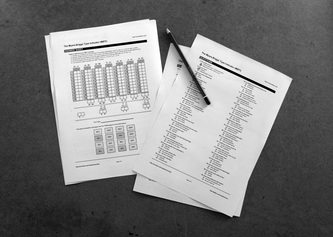 The grid makes it possible to introduce divisions and contrasts, in other words the formal conditions necessary for a significant message to be conveyed. – Claude Levi-Strauss, 1966 [i]

It can be argued that no form is more archetypal of modern­ art, or indeed modernism, than the grid. This is because, as Levi-Strauss suggests, it exemplifies divisions, contrast, rationality and logic—the pillars of modern thought. Against a backdrop of industrialisation, secularisation and the division of labour, modernists believed they could increase efficiency by rationalising every aspect of existence, in order to achieve universal harmony. Their voracious appetite for rationality is evident not only in art, but also in architecture, design, literature, philosophy, and, as discussed here, psychological theory.

Whereas Piet Mondrian employed the grid to advocate pure abstraction as a way toward aesthetic harmony, Carl Jung proposed the existence of two dichotomous pairs of cognitive functions to rationalise human behaviour, and in turn achieve social harmony. Jung believed that there were two ‘rational’ (judging) functions—thinking and feeling; and two ‘irrational’ (perceiving) functions—sensing and intuition. He suggested that these two functions were expressed in either an introverted or extraverted form. What began for Jung as a means of understanding the opposing psychological theories of Sigmund Freud and Alfred Adler, became a popular theory about humans’ natural inclination towards particular psychological types, on which Katharine Cook Briggs and daughter Isabel Myers Briggs developed the Myers-Briggs Type Indicator (MBTI) assessment.

The Myers-Briggs Type Indicator has sixteen possible outcomes, whereby the subject is assessed as favouring either: extraversion or introversion; sensing or intuition; thinking or feeling; and judgment or perception. These terms have specific meanings when used in the context of the MBTI, which differ slightly from their everyday use.[1] Further, the MBTI does not claim to measure one’s capacity to exercise each of the aforementioned functions; rather, it indicates natural preference. For this reason, the MBTI is commonly used by businesses and organisations to improve working relationships by way of better understanding employees’ natural ‘types’.

Current Projects is concerned with promoting active, meaningful engagement and exchange between artists, writers and curators. Composed of six emerging artists and two emerging curators, Current Projects is, as an ARI, still in its infancy. Although it sets out to encourage new and experimental ways of thinking about the working relationships between artists and arts workers, these are issues that the group is still working through itself.

Over the last few months, the Current Projects co-directors have faced the various challenges involved with working as a group. As a way of acknowledging these challenges, for the first exhibition of the Metro Arts residency, Current Projects will present the results of each co-director’s MBTI assessment.

While some results have rung true for a few members, and have even reflected some existing behavioural patterns within the group, the act of taking the test is not intended as a means to an end. Although it has provided some food for thought for our collaborative processes, to use the results as rigorous guidelines for cooperative function, would be to belie the complexities of psychological behaviour. As Krauss writes, “In the flatness that results from its coordinates, the grid is the means of crowding out the dimensions of the real and replacing them with the lateral result not of imitation, but of aesthetic decree”.[ii] Here, Krauss suggests that the grid favours aesthetic rationality over reality, thus alluding to its fallibility in everyday use. Similarly, the MBTI has its shortcomings. Critics have questioned the validity of the MBTI, arguing that it is too vague, and relies too heavily on the honesty of the subject. If the trials of modernists have taught us anything, it is that nothing should be reduced to black-and-white. Dichotomous structures are impractical and unrealistic in an everyday context, as they fail to capture the complexities—the greyness—of reality. Due to these practical limitations, the act of taking the test is intended simply as a gesture—a token action by which to acknowledge the challenges of collaboration, and a wry nod to modernist problem solving strategies.